HEAT WARNING: Please be aware that products may melt during transit. Thank you for your understanding.
NOTICE: Our office will be closed on August 2, orders will be shipped out on August 3. Happy BC Day! Dismiss 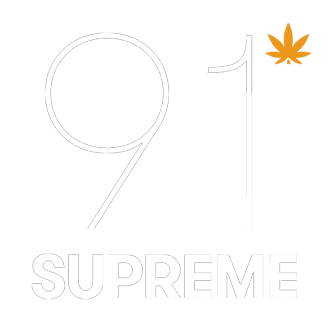 Operating from BC, Canada. 91 Supreme develops the purest concentrates from the highest grade of strains. Rest assured as they are a team of horticulturists and extract artists that set the bench mark for craft cannabis extracts in Canada you will not be disappointed by the quality.

Shatter from 91 Supreme is a stable and glass-like concentrate that has the greatest popularity among all cannabis concentrates. Shatter, should be able to be held under room temperature without melting. It should still maintain it's glass-like consistency without melting or sticking to the fingers. 91 Supreme purges all their BHO nug-ran shatter for over 105+ hours, constantly flipping the slabs multiple times to ensure even distribution of purging. It contains approximately 65-80% THC levels and 1-10% CBD.

Live Resin is an extraction from cannabis flowers that contains the highest level of terpenes preserved within the Butane Hash Oil. Live resin usually offers the best flavor profile compared to any other BHO extractions. Producing live resin requires flash freezing freshly harvested marijuana buds and freezing them under subcritical temperatures before the actual extraction process. When the BHO is exposed to high temperatures, air, light, or physical agitation, it can destroy terpenes, compromising the overall taste of the extract. Live resin generally contains a elevated terpene content with a reasonable amount of THC. 91 Supreme's live resin concentrates have approximately 55% THC and 1-10% CBD. The terpene content ranges from 5-40ml per gram depending on the method of extraction.

HTFSE/HCFSE (also known as High Terpene Full Spectrum Extracts or High Cannabinoid Full Spectrum Extracts) are highly concentrated forms of THC that have a strong flavour profile based on the terpenes that exist in these extractions. The components that make HTFSE harmonize together to create a sensory overload. 91 Supreme’s High Terpene Full Spectrum Extracts are initially created from humble beginnings as de-waxed BHO or Butane Hash Oil. After an extraction process, THCa content is seperated from terpenes and other compounds, which eventually isolates into a crystalline form of THCa, or almost virtually 100% pure THCa. As THCa crystals, or boulders are isolated from other cannabinoids, terpenes are also being seperated at room temperature. After this process of molecular separation, both compounds are merged together again to create a mouth-watering, flavourful and profoundly aromatic extract. The extracts have a high amount of terpenes/flavonoids/cannabinoids contained in the strain of the specific flower. They are fully dewaxed hydrocarbon runs that are left to crystallize. HTFSE is a saucy, consistent oil often mixed with HCFSE which is the "diamonds" referred to the crystallized THC-A portion. Mixing this creates caviar, diamonds or sauce.

Caviar is a product that was introduced following the extraction of HT/HCFSE. Following the same process as HTFSE. Caviar contains both HT/HCFSE by mixing the content of the HT oil with the crystallized HCFSE to create a high terpene profile concentrate that packs a punch.  Approximately containing 40-60% THC, 1-10% CBD and 20-40ml of terpene content in each gram.

Vaporizer Kits are products sold by the 91 Supreme Team to showcase their premium THC cartridges with a charger and battery stick included for convenient vaping of their made in-house distillate.

Write a review for this brand