If its name isn’t enough to capture your attention, the Penis Envy strain of Psilocybe cubensis is one of the world’s trippiest, and thus, also one of the most sought after magic mushrooms! Legend has it that the original Penis Envy mushrooms were first discovered in the Amazonian rainforests by ethnobotanist and psychedelic advocate, Terence McKenna with the help of local indigenous tribes back in the early 70s. While the origin of its name isn’t exactly clear, it’s obvious that it was named for its phallic physical appearance, with characteristic thick shaft stems and round bulbous heads. It’s theorized that its stronger effects are due to a higher psychotropic alkaloid content, as well as a higher ratio of psilocin/psilocybin, though because of these peculiarities, it can be hard to cultivate, so the strain is quite rare to find! Undeniably stronger than many other shrooms, some reports argue that it is actually the single most potent Psilocybe cubensis due to its extremely intense euphoria and heavy mind altering visual effects. Not recommended for first timers, Penis Envy is more suitable for mystic adventure seekers and seasoned psychonauts, offering users a transformative experience unlike any other! 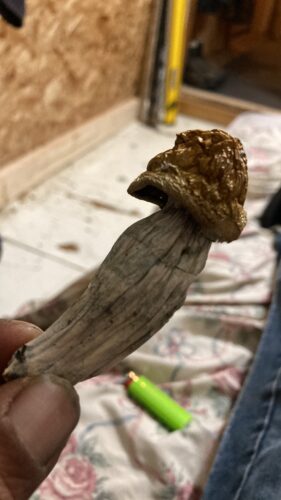 When will my order ship?
Orders paid before 10:00 AM (PST) will ship the same business day. Any orders paid for after 10:00 AM (PST) will be shipped the following business day (Excluding Weekends & Holidays)
Why is my order on hold?
Once you place your order, it will have the "On-hold" status until payment is received. Once we receive payment, your order status will change to PROCESSING within 24 hours of receiving payment. When your order is complete, we will issue you a tracking number that is included in your order receipt which will be sent via email. Note: Please check your spam folder if you do not see the email in your main inbox.
When will my E-transfer be accepted?
We accept payment within a few hours of being received in our inbox. Please check to make sure you have sent it to the right email address as this will prevent delays in getting your order shipped out.
It has been 24 hours and I have not received tracking
If you have not received a tracking number, this is most likely do that your order is still ON HOLD Which means we have not received your payment. Please check to make sure the E-transfer was sent to the correct email address provided at checkout and email. If your order is still PROCESSING, please email us at support@greensociety.cc and we will look into why the order has not shipped and quickly resolve the issue.
How long does shipping take?
We ship all orders Xpresspost with Canada Post Shipping usually takes about 2-3 business days to major cities of Canada. Please plan accordingly if you want to receive your order the same week. We highly recommend you place the order on the weekend or Monday/Tuesday if you wish to receive the order the same week. NOTE: Canada Post does not accept parcels on the weekends which is why there is no shipping. All weekend orders will be shipped first thing Monday
How to Register / Create an Account - What are the requirements?
To create an account, please go to https://greensociety.cc/register and fill out all the information for your account to be approved
5
Rated 5 out of 5
100%
3
4
Rated 4 out of 5
0%
0
3
Rated 3 out of 5
0%
0
2
Rated 2 out of 5
0%
0
1
Rated 1 out of 5
0%
0
With images (1) Verified (3)
All stars(3)