Watermelon Zkittlez is an indica strain that quickly took over cannabis dispensaries by storm in Los Angeles with its candy like flavours and sweet, fruity essence. Notes of grapes, berries and refreshing watermelons are accentuated by the subtle earthiness of Zkittlez’s Cali Glue DNA and combine together to create a truly striking terpene profile.

Watermelon Zkittlez is an indica strain that quickly took over cannabis dispensaries by storm in Los Angeles with its candy like flavours and sweet, fruity essence. 3rd Gen Family and Terp Hogz originally crossed together Grape Ape, Grapefruit and a third unknown strain to produce this candy flavoured indica. There are many phenotypes and cuts of this strain available now with its mainstream recognition, but Barney’s Farm takes the cake when it comes to the real deal. Watermelon Zkittlez by Barney’s Farm is a cross between the original Zkittlez strain and Cali Glue, a dank variant cut of Gorilla Glue #4. This heavy hitting indica boasts a staggering 20%-25% THC concentration and CBD levels of <2% and is not meant for the feint hearted or newer, beginner smokers. The high of Watermelon Zkittlez by Barney’s Farm is described as being surprisingly cerebral and euphoric for the likes of an indica strain – prepare to feel happy, giggly and relaxed, all while forgetting about your everyday stress. The signature aroma and flavour of Watermelon Zkittlez is recognized by its unmistakably sweet and tropical fruity essence. Notes of grapes, berries and refreshing watermelons are accentuated by the subtle earthiness of Zkittlez’s Cali Glue DNA and combine together to create a truly striking terpene profile.

TLC1983
Rated 5 out of 5
Tastes like summer, bright fresh fruity flavor, burns smooth and slow and gets you nice and toasted.
Helpful?
0 0
mpodaras
Rated 4 out of 5
Great tasting strain got some to try out,will get an ounce next order
Helpful?
0 0 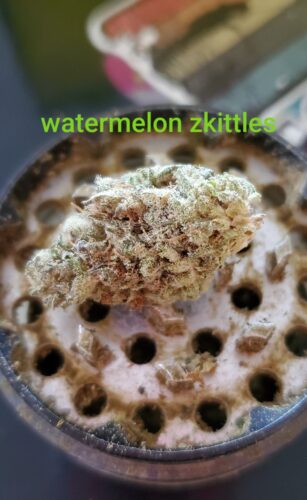 My first time sampling Zkittlez, and I must say I was pleasantly surprised. Among the handfuls of “hype strains” in recent years, I expected this to have a nice fragrance and flavour with a mild/mediocre buzz... However, I’m happy to report that my oz. of Zkittlez not only wreaked like a bag of delicious candy, it actually brings very pleasant and relaxing effects with it. I find the stone is soothing without me down. Much more enjoyable than I’d ever imagined. Will definitely buy again. (Pro tip: Vape this flower at low temp to experience it’s flavour to the fullest)
Helpful?
0 0

When will my order ship?
Orders paid before 10:00 AM (PST) will ship the same business day. Any orders paid for after 10:00 AM (PST) will be shipped the following business day (Excluding Weekends & Holidays)
Why is my order on hold?
Once you place your order, it will have the "On-hold" status until payment is received. Once we receive payment, your order status will change to PROCESSING within 24 hours of receiving payment. When your order is complete, we will issue you a tracking number that is included in your order receipt which will be sent via email. Note: Please check your spam folder if you do not see the email in your main inbox.
When will my E-transfer be accepted?
We accept payment within a few hours of being received in our inbox. Please check to make sure you have sent it to the right email address as this will prevent delays in getting your order shipped out.
It has been 24 hours and I have not received tracking
If you have not received a tracking number, this is most likely do that your order is still ON HOLD Which means we have not received your payment. Please check to make sure the E-transfer was sent to the correct email address provided at checkout and email. If your order is still PROCESSING, please email us at support@greensociety.cc and we will look into why the order has not shipped and quickly resolve the issue.
How long does shipping take?
We ship all orders Xpresspost with Canada Post Shipping usually takes about 2-3 business days to major cities of Canada. Please plan accordingly if you want to receive your order the same week. We highly recommend you place the order on the weekend or Monday/Tuesday if you wish to receive the order the same week. NOTE: Canada Post does not accept parcels on the weekends which is why there is no shipping. All weekend orders will be shipped first thing Monday
How to Register / Create an Account - What are the requirements?
To create an account, please go to https://greensociety.cc/register and fill out all the information for your account to be approved
5
Rated 5 out of 5
64%
21
4
Rated 4 out of 5
27%
9
3
Rated 3 out of 5
9%
3
2
Rated 2 out of 5
0%
0
1
Rated 1 out of 5
0%
0
With images (1) Verified (33)
All stars(33)